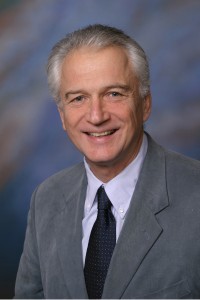 Dr. Paul H. Sugarbaker, FACS, FRCS graduated from Cornell University Medical College in New York City and received his surgical training at the Peter Bent Brigham Hospital in Boston, a Harvard University affiliated program. There he also received a Masters Degree in Immunology at the Harvard School of Arts and Sciences. In 1976 he accepted a position at the National Institutes of Health/ National Cancer Institute - Surgery Branch, as Senior Investigator until 1986. Subsequently, after a brief stay at the Emory Clinic in Atlanta, Georgia he moved back to Washington, DC to become the Medical Director of the Washington Cancer Institute at MedStar Washington Hospital Center in 1989. Currently, he is the Chief of the Peritoneal Surface Malignancy Program and the Director of the Center for Gastrointestinal Malignancies at the Washington Hospital Center in Washington, DC.

His interests are focused exclusively on gastrointestinal cancer, gynecologic malignancy, and peritoneal mesothelioma of the abdomen - all malignancies which usually present with cancerous spread to the abdominal cavity. Currently, his clinical and investigative work is concentrated on the treatment of the peritoneal surface dissemination of cancers, referred to as PERITONEAL METASTASES, also known as peritoneal carcinomatosis. He has developed, perfected and popularized the combined treatments of cancer surgery with warm chemotherapy, infused into the open abdomen towards the end the surgical intervention.

His mantra, "It's what the surgeon doesn't see that kills the patient," summarizes his thinking as he realizes the limitations of surgery alone, and the limitations of systemic or regional chemotherapy alone. It turns out that the combined application of both the surgical removal of the tumors and the regional treatment directly into the open abdomen where the tumors are located, is especially effective in selected patients. This treatment option and its results have been published extensively in the peer-reviewed literature and in the lay press. Further work to supplement these treatments and to make them even more effective by adding systemic chemo infusions: Perioperative intravenous and intraperitoneal chemotherapy (HIPEC and EPIC} are an essential planned part of these combined surgical and regional chemotherapy interventions.

Over the many years he has published over 1000 articles and book chapters, edited 7 books, produced 24 videos, and received 4 honorary professorships. He has traveled to all 5 continents to make these treatments available to patients all over the world.