Specialty Section for the Treatment of Peritoneal Mesothelioma

Peritoneal mesothelioma is a rare disease. The total number of cases per year in the United States is estimated between 100 and 500. A number of patients have a history of asbestos exposure. Because of the frequent dissemination of pleural mesothelioma to the peritoneal cavity, one must rule out spread from a primary pleural malignancy as the cause of peritoneal disease. No genetic, dietary, employment or geographic associations have been reported.

Peritoneal mesothelioma is unusual in that it demonstrates a wide spectrum of biological aggressiveness. The cystic variant of mesothelioma may cause recurrent episodes of severe lower abdominal pain but may not result in the death of the patient for many years. In contrast, the most aggressive mesothelioma variants may show metastases from the peritoneal surface to mesenteric lymph nodes at the time of initial surgery. Patients are diagnosed as having a malignant mesothelioma by histologic and immunocytochemical study. Frequent mitoses and increased size of the nucleus indicate an aggressive malignant process. Dissemination by cancer seeding and peritoneal fluid production would result in disease progression. As the peritoneal fluid produced by mesothelial nodules increased, dissemination to sites of peritoneal fluid resorption would be expected. Patients who are diagnosed with peritoneal mesothelioma often present to their physician with a large volume of ascites.

The widespread progression of malignant cells on peritoneal surfaces results in copious fluid production. The fluid production can be attributed to the retention of a functional property of normal mesothelial cells. In these patients the peritoneal space becomes a free conduit for mesothelioma cells to migrate from place to place. In the production of ascites fluid, the cancer cells provide themselves with a carrier solution to disseminate throughout the abdominal and pelvic spaces.

Due to a lack of symptoms early in the natural history of peritoneal mesothelioma, a large majority of patients are first diagnosed with a large volume of disease diffusely spread throughout the abdomen and pelvis. The disease accumulates in largest volume at sites of peritoneal fluid reabsorption and at dependent sites by gravity. The small bowel surfaces and mesenteries are not spared of mesothelioma implants as in the mucinous appendiceal neoplasms.

Promising results of treatment from a new strategy: cytoreductive surgery plus perioperative intraperitoneal chemotherapy: Four groups have now reported on approximately 300 malignant peritoneal mesothelioma patients. The National Cancer Institute in Bethesda, MD, The Washington Cancer Institute in Washington, DC, The Columbia Mesothelioma Center in New York and the National Cancer Institute in Milan, Italy. Each group has reported their experience with between 50 and 100 patients. With current treatment all the groups report a median survival of 5 years or better. The median survival in the past was approximately 1 year (see Tables 1 and 2). As a result of this apparent major improvement in survival with a new treatment strategy, it has become standard of care for these patients.

2. Concerning the selection of patients using histological type of mesothelioma: All groups agree that the patients with sarcomatoid or biphasic peritoneal mesothelioma do not show great benefit from this treatment. Dr. Chabot and the Columbia Mesothelioma Center agreed with the limited benefits but advocated continued aggressive approach with patients found to have biphasic mesothelioma. The Washington Hospital Center group also suggested that patients with grade IV findings in the nucleus demonstrate a poor outcome with combined treatment. They suggested that these patients should also have neoadjuvant chemotherapy prior to initiating the combined approach. In those patients who show reduction in the volume of disease and symptomatic improvement, cytoreductive surgery with perioperative intraperitoneal chemotherapy may be considered. In those patients who do not have a response to first-line chemotherapy, then second-line chemotherapy with Gemzar can be recommended. In patients not responsive to either of these systemic chemotherapy treatments, best palliative care would be offered.

3. Regarding cytoreductive surgery: Cytoreductive surgery with peritonectomy is the first step in treatment of all four institutions. However, the extent of surgery varies considerably between the four groups. Perhaps the most conservative initial effort is proposed by Dr. Chabot. His initial treatment is a minimal debulking, usually only a greater omentectomy and removal of large tumor nodules. Then intraperitoneal ports are placed and the patient receives interval intraperitoneal chemotherapy using doxorubicin and cisplatin or mitomycin C and cisplatin. In his new protocol, heated intraperitoneal chemotherapy will be used at this initial event.

Dr. Pingpank at the National Cancer Institute, USA, advocated a visceral sparing cytoreduction. In this approach large cancer nodules would be removed, peritonectomy would be performed, however, complete removal of the disease would not be attempted.

At the National Cancer Institute of Italy and at the Washington Hospital Center, complete cytoreduction has been attempted down to no visible evidence of disease. Peritonectomy procedures of the right and left hemidiaphragm and pelvis are standard of care in this group of patients. Also, visceral resections of the right colon or left colon, if it leads to a substantial reduction in the volume of disease, is advocated.

The morbidity and mortality of the combined treatment is thought to be acceptable at dedicated treatment centers (Table 3).

4. Regarding the perioperative intraperitoneal chemotherapy: All groups advocated a cisplatin-based hyperthermic intraperitoneal chemotherapy. The doses were different at all four institutions. The heat, approximately 42.5ºC, was the same at all institutions. The drugs combined with cisplatin were doxorubicin and mitomycin C. At the National Cancer Institute, USA, high-dose cisplatin with systemic thiosulfate has been used.

The role of systemic chemotherapy with Pemetrexed and cisplatin has yet to be determined after combined treatment. Currently, it is often used in this group of patients, especially those with aggressive disease and a suboptimal cytoreduction.

8. Regarding follow-up and identification of patients with recurrent disease for possible symptomatic second-look: The CA-125 tumor biomarker is suggested as a follow-up for these patients. The progressive rise of CA-125 was identified as a signal of recurrent disease by the National Cancer Institute of Italy. CT scan with oral and intravenous contrast is a valuable follow-up tool in this group of patients. MRI is not thought to be of value. PET scanning is suggested as a new tool to be studied in this group of patients. PET scans may be most valuable when the readings move from negative to positive: this should strongly suggest progressive disease. Reoperation for low-volume disease is considered a potential part of the standard of care clinical pathway.

9. Regarding the use of intraperitoneal chemotherapy to palliate large-volume ascites: All agreed that patients with debilitating ascites from peritoneal mesothelioma respond well to debulking surgery plus the heated intraperitoneal chemotherapy. This use of the mechanical and chemical cytoreduction could be considered a standard of care for palliative management of patients with debilitating ascites. 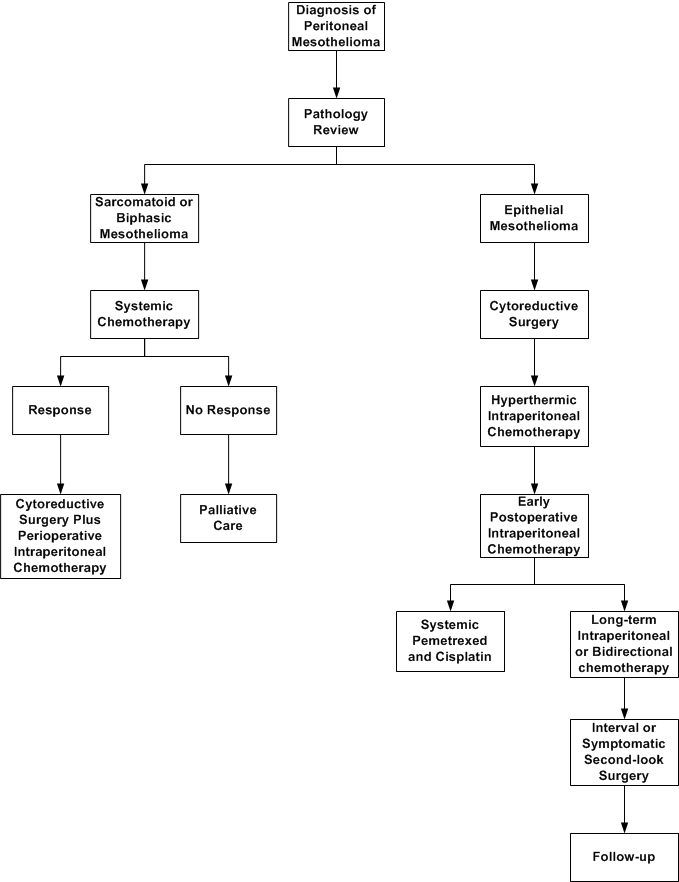